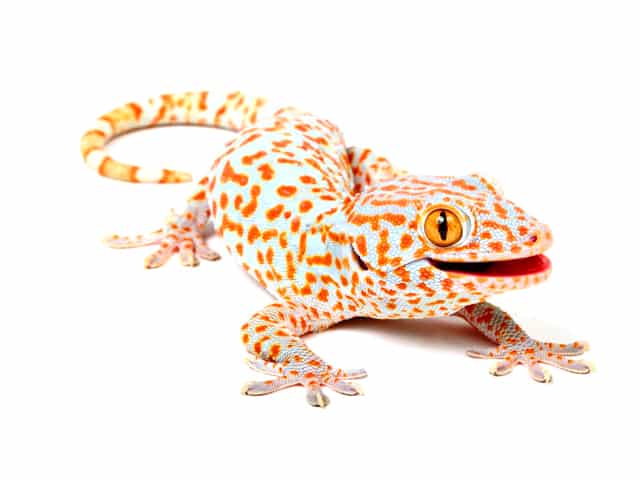 The Tokay Gecko is the second largest Gecko species. They are distinctive in appearance, with a bluish or grayish body, sporting spots ranging from light yellow to bright red. The male is more brightly colored than the female. They have large eyes with a vertical slit pupil. Eyes are brown to greenish brown and can be orange or yellow.

Compared to other gecko species, the Tokay gecko has a robust build, with a semi-prehensile tail, a large head and muscular jaws; though common in the pet trade, Tokays are reputed to be capable of inflicting a painful bite, making them ill-suited for inexperienced keepers.

Tall tanks are best or standard tanks set on end because Tokay Geckos are a naturally arboreal species that seek vertical hides. Being a very active species, they should be given as much room as possible with each side longer than the full length of the gecko. For a breeding pair of Tokay geckos an enclosure of 0.6 x 0.6 x 1.2 meters (2 x 2 x 4 feet) would be adequate. It’s recommended for the enclosure to be accessible from the front rather than the top because when accessing the enclosure you won’t look like a predator. Of course the rule of bigger the better always applies as long as you can keep the temperature and humidity at the recommended levels.

Tree hollows are favorite natural habitats and can be replicated with hollowed bamboo, cork rounds, or PVC pipe. Flat or curved cork slabs can be set against the tank walls with additional pieces leaning on each other as well. Dropping plants are perfect for additional hides since they provide a light cover over glass and furniture.

Tokays can be kept naturally on Eco Earth, Forest Floor, and Jungle Mix because those are intended for tropical species that require higher humidity.

Being nocturnal, Tokays should be provided with heat sources that do not affect their day and night cycle. This can be done with red or blue heat bulbs or heat tape controlled with a thermostat. Temperatures should be at least 24 ºC (75 ºF) degrees and range up to 35 ºC (95 ºF) for the hot area if there is enough room for the gradient such as a 55 gallon tank. Ambient 27-29 ºC (81-85 ºF) for the whole tank is fine as well.

Tokays will drink from a water bowl and off the glass from misting. Some new imports need the misting until they learn to use a bowl.

Humidity is best at a minimum of 80% and up, done with misting the tank and having damp bedding.

Tokays should be kept on a varied insect diet. This can be crickets, roaches, hornworms, superworms, or any other commercially available insect. Not every gecko will like everything offered, though and smaller prey is often ignored. Insects should be gut loaded and dusted with vitamins and calcium prior to feeding. Tokays will actively hunt, but they will also eat from a bowl which can help with certain insects that burrow or hide quickly.

Due to the majority being wild caught imports, not all Tokays can or should be handled nor should interaction be attempted on new geckos until they are in correct health. Stressed Tokays will avoid eating and the poor condition they start in from suppliers makes it dangerous for them not to eat. They will literally starve themselves to death if disturbed too much. Their natural defense is to stand up to what they see as a threat and they are designed to bite so it is best to expect to be bit whenever entering the tank.
To avoid or react will cause the gecko to bite and bark more because they do understand they are driving you away. These reactions are also the Tokay’s natural means of communication so one that is merely annoyed will just spit on you rather than actually bite. Offering food with long tweezers in their tank, best held at the edge of their favorite hide so they come to you to take it, is a great way to desensitize the gecko to your presence. It is best that they don’t think you are trying to catch them every time they are seen out in the open and they will actually learn to look for you as a food source.
Hand feeding is not recommended only because it will scare both you and the gecko when your fingers are grabbed with the bug by an excitedly hungry Tokay. It is best to scoop the gecko up without restraining them because most will react defensively since they see restraint as being caught by a predator. Even those hand raised do not like to be restrained. Tokays are a fairly quick species so a gecko new to handling will often run and jump until they understand they are in no danger, but you can easily see and feel their intended movements.
It is best to keep them in your hands where you can watch and control where they go until they are calm enough to sit on you, but this can take months of work. You can keep your fingers lightly closed around them to make them push through your hands which helps you feel their movements as well as slow them down and help them understand they are not being harmed. They will lick when learning their surroundings and are becoming more comfortable. Tokays do not have to be handled daily to tame them nor keep them tame.
It is not recommended to try breeding and frequently handling because Tokays are naturally protective of their mates. If you prefer them tame, try doing so before putting the pair together because if one is afraid of you then the other will react the same because it only understands that it’s mate sees a threat. Some Tokays are fine with human interaction while breeding, but it should not be expected. Some that are fully tame by themselves are very defensive with a mate and eggs, but return to tame once the eggs are hatched and they are removed to their own tank.

Tokays will often deposit in the same general area of the tank making cleaning easier. The glass needs to be wiped down often since these arboreal geckos will leave streaks running down the glass.

Proper humidity will help with shedding and a healthy Tokay will often not leave any shed to be found since they naturally eat the skin. If patches of skin are seen on the gecko for extended periods, humidity should be the first check followed by the health of the gecko since this can be an indicator of problems.

Most Tokays available are wild caught imports that arrive in pet stores and expos in poor condition due to limited care starting at the time they are captured. This can be seen by thin bodies with visible hip bones at the tail base, sometimes with the spine and definition of the skull visible as well. These geckos need optimal nutrition and hydration for generally up to six months before they are in proper health. Calcium deficiency is common in new Tokays as well, especially females, but does not often have visible signs. Weak movement can be, but a common one is a defensive bite that actually breaks the jaw of the gecko. Females with a deficiency, having been bred too early or before their health has been properly improved, can suddenly have a crash after laying eggs and have know to be killed in as few a two consecutive clutches. The effects include lethargy, physical weakness, and often lying on the ground and can be seen as quickly as within 24 hours after a clutch is laid. Immediate veterinary care is necessary because reptiles do not easily show health issues since this attracts predators, thus seeing a problem indicates it is not new and often more advanced than home remedies can fix.
Red gecko mites are common and often overlooked because of their tiny size and blending in with the Tokay’s natural spot colors. These are easily treated with multiple commercial products, but do take about a month to be fully rid of if treatment is done correctly. Internal parasites are even more common than external since they can be picked up from the insects they eat, but the stress of being imported and shipped around causes the gecko’s immune system to weaken allowing the parasites to multiply to higher numbers that are not what the gecko can naturally live with. This is why all new geckos should be treated with a wormer prescribed by a vet after doing a fecal exam to identify which parasites are being carried. 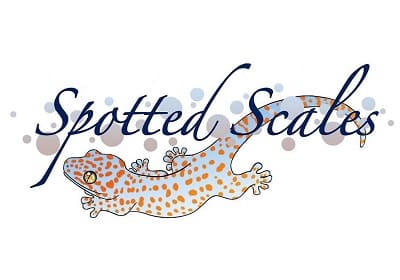 The information contained in this care sheet reflect the opinions and methods of the mentioned breeder, based on their expertise and long-established experience.